How did it all start and what do people mean by "the roof of Sälen"?

Did you know that tourists in Sweden first came to the mountains to take the air? They came to the peaks to take a breath. They mainly did nothing at all. They just enjoyed doing nothing. Took a walk. Warmed their toes by the fire. May be you did already know? But we bet you don’t know what Vargy eats on a Saturday? Or how the height of Sälen’s highest peak? Here we have all the answers! 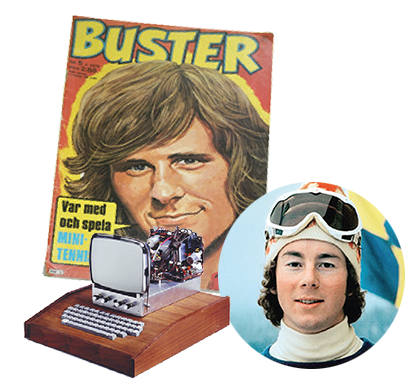 The year was 1976, the year that Ingemar Stenmark won the World Cup in downhill skiing for the first time, Thorbjörn Fälldin became prime minister, Apple Computer was started by Steve Jobs and Steve Wozniak, Swedes got to know both Björn Borg and Queen Silvia, children drank banana-flavoured Zingo, and downhill ski-ing became fashionable.

HOW IT ALL BEGAN
Stöten’s ski-slopes were the brain-child of two entrepreneurs, Bertil Lind who founded Lindvallen and Torsten Widing, the owner of Högfjällshotellet. They wanted to find a place with steeper, better slopes to offer a more challenging daytrips for their guests. It became clear quite soon that people wanted to stay and ski for several days, so the idea of building a hotel and guest cottages was a natural choice. And that is how it went. Stöten is part of Sälen but still retains its own soul, characterised by the mountains which must be the most striking in the whole of Dalarna. In 1976 the very first guest to the top of the mountain.

THE ROOF OF SÄLEN Östra Granfjället is the highest peak in the Sälen mountain area, 948 metres above sea-level. The north side offers a magnificent view over both Swedish and Norwegian mountains. The famous hiking route Kungsleden passes through as well as the 16 km long cross-country ski trail, Östra Granfjällsturen. The ride up is easiest on the Vargy Express instead of the WC Express chairlift. From the top you glide easily down for one kilometer to the top of Mormors Störtlopp. The trail continues around Östra Granfjället, past Närfjällsstugan and along the scooter tracks back to the Vargy Express which will take you down again.

ÄLVAN
The slope with Sälens biggest altitude drop is ranked by many as Sälens, nay maybe even Sweden’s without a doubt best ski slope. Both national slalom and World Cup telemark championships have been held here. Will you make it all the way? Älvan has been recognised as Sweden’s 5th best slope by Åka Skidor Magazine. A quick search of the name “Stöten” turns up everything from crime stories to mine shafts. Nothing could be further from the truth, The name Stöten is a shortening of Granfjällsstöten which means the steep side of Granfjället, literally, the pine mountain. Did you know that Vargy, the kindest and cuddliest wolf in the world, eats masses and masses of salad on Saturdays? Guess what he eats for the rest of the week? Sweets of course!